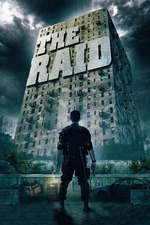 The Raid: Redemption is an action-packed thrill ride and the most violent movie I think I've ever seen. The film is about a group of police officers trapped and hunted in a crime lords building. The plot is secondary to the style and action in this one, but it's for good reason. The raid is a new kind of martial arts film which doesn't pull any punches and leaves you with a sense of excitement at the end.

Technically speaking the film is very good. It is well shot, the music is very appropriate for the style, and the fight choreography is some of the best I've ever seen. Watching the film for the first time in it's original Indonesian brings out a quality to the action and story that was honestly lost on me before now. I could go on and on about the different fights in this film and how nearly every hit looks like the most painful thing I've ever seen(If you ever talk to me in person I will). The truly astounding thing about The Raid is that for whatever it lacks in depth of story it more than makes up for in style.

Since this is really at it's heart an action film the theme is not super important, though it is definitely present. The futility of our hero's, Rama's, goals and corruption of the system are the main talking points. These theme's are much more well emphasized I feel in the original language but by them selves aren't super strong or moving.

Finally speaking the film's strongest point. This is a film I've watched now two or three dozen times. It's a go to for me because it is so damned entertaining. All I'll say is that every person I've ever watched this film with has the urge to elbow and knee their way through a crowd of criminals afterward. It has an effect on me each time as well.

Giving The Raid: Redemption 4 1/2 'elbows to the temple' in my book.

This is a shorter review than normal but it doesn't mean this film isn't worth your time. If you are an action-junkie, martial arts movie fan, this is a must. Most people would really enjoy this film. Maybe not the best one to show to grandma or the kids but this film still has a very wide appeal.