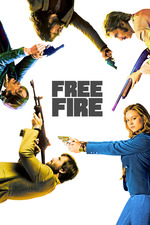 This film was bonkers fun. When a guns buying deal goes wrong, a mass shooting among our lovely characters ensues. All of the actors here are perfectly casted in their roles. The film has quite a resemblance to Reservoir Dogs.

This was my second film from Ben Wheatley, the first being High Rise which was a huge disappointment but this one was great. From outstanding color grading to great cinematography to the acting of the characters, everything about the film is great. All the characters are brilliantly written to be cocky assholes and egomaniacal.

One negative thing about the film I would have is the character interactions. They share too many quips with each other that are supposed to be funny but ultimately it feels like a wannabe Quentin Tarantino script