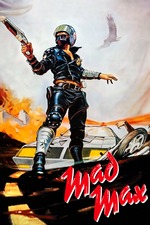 Most people know the Mad Max franchise as this gritty and violent post-apocalyptic world but the first film is sort of a prequel, an origin story for the titular character Max.

Now, this film also mainly focused on the barren wasteland with biker gangs but it's more of a revenge flick. The story is slow too and the inexperience of the cast and crew is visible here.

Although, Mel Gibson was great in his role.

Hopefully, the much loved and talked about sequels will be better than this