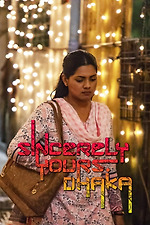 It's a love letter to the metropolitan city of Dhaka presenting the city as one of its most major character.

Although most of the stories in here to be very repetitive, depicting people in desperate situations with similar tragic outcomes. Only some few stories were different and good (the first one, second one, the one with the overnight stay at the jail and the last one) while others were just okay.

Even the weaker stories were enhanced due to the acting of the cast, the film's unarguably most strongest point.

I felt like it only showed the lives of certain people, not all of the culturally different people in the real Dhaka City