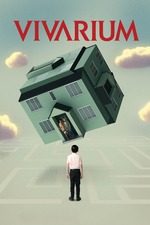 Vivarium is a Twilight Zone-esque story captured into a movie. The premise is really intriguing and scary.

The story builds up on this couple looking for a home but instead they stumble upon something sinister and inescapable.

The characters are especially the highlight of the film. Though Eisenberg's character felt a bit dull and useless as the film went on but Poots' character was really strong.

The production design and the set design is what makes this film so, so good. The whole neighbourhood is really built like a LEGO city. The clouds look like the real-version clouds from the Toy Story movies. The while scenario is creepy and very disturbing.

The movie really started strong but the middle part of the film is where it started to drag, some of the story elements became a bit repetitive. It did manage to pull off a decent ending though.