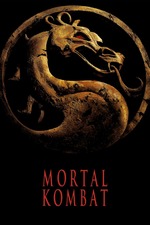 I think I had some kind of psychotic break because suddenly a double bill of Mortal Kombat and Street Fighter seemed like a good idea. Some would say it's about as good an idea as the time Gary Oldman had the idea to rip his own face off in Hannibal, but I maintain that that is a slight exaggeration.

I think I saw this in 1995 and hated it and I can see why. There's very little to admire in the way this has been put together - it doesn't even have the slick polish which Paul WS Anderson would refine almost to a fault later in his career.

And yet, I think Mortal Kombat has a certain charm to it. Partly, this is gained through the writers having enough of a brain to adapt the game by just ripping off the premise of Enter the Dragon - which seems obvious except it was something the writers of Street Fighter signally failed to do (more on that later). But also, against all the odds, our three protagonists develop some kind of appeal. I think that's mainly down to Linden Ashby as Johnny Cage, who is pretty good and also pulls off the lame jokes in the script well enough to actually make the character amusing. Robin Shou brings a bit of martial arts cred too and, although Bridgette Wilson has the acting ability of a sock on a stick, it just doesn't seem to matter.

Plus there's a four armed demon thing which they have to fight and, despite the CGI in this movie being purely abysmal in every other respect, this creature looks amazing. I honestly still don't know if it was CG or some kind of practical effect.

Christopher Lambert is incredibly weird - popping up and acting all wise and zen-like before throwing in an odd quip and sniggering like Beavis and/or Butthead (while we're on the topic of the 90's...).

I'm not going to say it's a good movie - anything but that - but I don't know, I did quite enjoy this one!