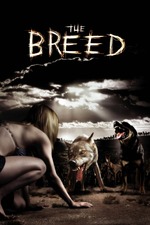 Nicki: Give Cujo my best.

I wouldn’t classify this as a Horror Comedy. This is more of a horror than anything. I feel like I have seen this before. That or Michelle Rodriguez has been in a good number of real low budget horror. Her and Taryn Manning did a solid job here. The best way I can describe this is that it’s complete shit that’s kind of cool to watch. I liked how all the dogs circled and attacked the house. They are like super dogs that outsmart the characters. I realize that isn’t saying a lot with characters in a horror movie. I would recommend for horror fans. Nothing special here though.

I haven’t been on here due to the current circumstances in the United States. It’s been so hard on me mentally that I can’t help but completely isolate myself. I love you guys, so if I’m not on here, you know it’s bad. I don’t know what I’m going to do. I truly think I’m ready to take up arms. That’s neither here nor there. As always, FUCK Donald Trump.

Twenty-nine dogs and ten trainers were used for this film. The trainers spent eight weeks prepping the dogs for the movie.