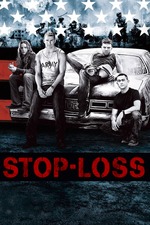 I knew a guy who was stop-lossed around the time of this movie's production/release; he was even my roommate in beautiful (ha!) Fayetteville, North Carolina for the last couple months of his [forcibly extended] contract. He ridiculed me because, as we watched The Office, I did bicep curls with a mere 25 pound weight, which made me a pussy or something, but also he was one of the only dudes who ever appreciated my bartending skills when I whipped up some Friday night black Russians in lieu of the grotesque energydrink+vodka concoctions that some of our teammates/apartment guests oddly preferred, so I liked him.

He hated the Army. He hated marching around the edge of the Tigris River. He hated inhaling sand when he walked from his bunk to the gym. He hated getting berated by a First Sergeant if he was spotted not wearing regulation goggles & PT glo-belt outdoors at the COP. However, he did his job. And he was good at it. He did get paid an additional several hundred dollars per month for most of his last deployment (a bonus for stop-lossed soldiers, on top of the overseas combat zone additional pay, on top of the extra $150 a month we got for being Airborne qualified even if we never did an actual airborne mission), along with something like $1000 monthly housing allowance when he came back to CONUS (that's how we afforded the nice coffee beans for my black Russians). These are elements that never appear in movies or shows about American military "volunteers" (ha!) and their traumas and tears.

I have great empathy for those who truly got screwed or victimized by the war machine, by their recruiters, by their commanders, by their own genetics or psychiatric-chemical imbalances, by the unfair trauma of having been trained to rush into the wrong haji alley where an ambush took the life of your friend and you saw his brain leak onto your kneepads while you called TIC (troops in contact) to an unresponsive TOC (tactical operations center). However I feel a greater alliance with those who experienced all this and came out of the other side just fine, enjoying our medical & financial benefits and mostly scoffing at dubious movies that glorify or exploit the most extreme cases of PTSD and martyrdom.

Biggie: I Got a Story to Tell

Behind the Ears: The True Story of Roger…