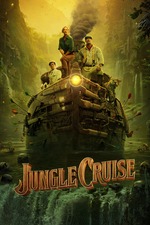 Another Disney movie based off of one of their rides. Oh boy. From the initial trailers of this film, I think I knew what to expect from this film going in. Dwayne Johnson playing another big muscly jungle man with Emily Blunt by his side this time going on an adventure. It seemed like something familiar but interesting. I wasn’t expecting anything groundbreaking but still a fun movie.

This film basically felt like Jumanji mixed with Pirates of the Caribbean. I mean that in a good way though because I actually had fun watching this. Dwayne is his typical self here and once again playing his typical hero. Nothing outstanding because he’s just Dwayne and it’s a jungle movie so he has to look strong of course. Emily Blunt does a decent job too even if the running joke about her wearing pants gets pretty old after awhile. The two of them together had some okay moments even if they weren’t the most convincing couple by the end. I will say that I liked how in the beginning of the movie it basically was like the ride itself with Dwayne being like the ride operator just showing people around with some animatronic stuff thrown in and set up like it’s a wild ride. It was nice to see the ride being honored like that. The villain of this film is pretty lame and stereotypical to be honest and not at all interesting. It was interesting that the motive was for Germany to win the war though rather than some vague motivation to conquer the world with power so at least it’s some kind of conflict rather than just a really stock storyline. The storyline is definitely predictable for the most part however. Most of you can probably guess what will happen as the storyline plays out and it is pretty generic and formulaic. That doesn’t deter from the entertainment factor though because this film is highly entertaining for most of it. Despite Dwayne’s really bad jokes which is faithful to the ride, it was a pretty fun ride. I will say though that the effects sometimes aren’t the best especially on the pet jaguar which was pretty bad. There’s also a sort of big reveal with Dwayne’s character in the middle of the film that you may or may not have seen coming. It was a strange revelation for sure and I didn’t really know how to feel about it but I guess it’s meant to make the film have higher stakes because of this reveal since it’s more motivation for them to find the treasure in addition to Blunt wanting to give it to science. The climax of the film did go on a little too long for me but it wasn’t unbearable or anything. I still left the theater entertained even if the film was nothing to get too hyped about.

Conclusion: Predictable yes. However a fun time at the theater for what it was. An average The Rock adventure movie with a lot of corny moments and jokes thrown in but still an entertaining ride just like the ride it was based off of. I won’t be rushing to watch it again but I’d say give it one watch because it’s fun for one viewing if you’re looking for a decent popcorn flick.