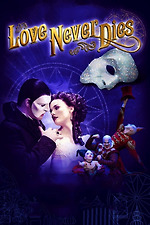 When I saw the soundtrack released in stores one day and noticed that it was a sequel to The Phantom of the Opera musical, my curiosity was peaked. I wanted to check it out, but Love Never Dies never made it to Broadway. Thankfully a DVD of the show in Australia has been released. In retrospect, I know why it failed to land on Broadway.

The plot of Love Never Dies is plagued with worn-out cliches that quickly drain all of the enthusiasm we may have had for the idea in the first place. It becomes apparent that the goal was to build a contrived, obvious storyline so that Christine and the Phantom could rekindle their romance. While there is one twist at the end I did not see coming, the majority of this unnecessary sequel is disappointing and dumb.

Christine travels from Paris to Coney Island where the Phantom now resides and has a son named Gustave with her. You can see where that goes. Gustave is supremely annoying. Meg Giry is around as well and her character is also irritating (thanks in part to Sharon Millerchip), but she also gets bludgeoned with the weakest songs. There is also an array of bizarre circus characters who serve no purpose except for to give the set decorators lavish designs.

The plot just gets silly, particularly when Raoul and the Phantom make a bet as to who Christine ends up with, as if this is an episode of Saved by the Bell. I will say that the face off between them results in one of the better sons, "Devil Take the Hindmost." Admittedly, it is cool that Andrew Lloyd Webber (with lyrics by Glenn Slater) developed new music more than 20 years after the original musical premiered. The title track here, along with a couple other numbers, are quite excellent.

The songs which do click are because of Anna O'Byrne, who is marvelous as Christine. Ben Lewis is solid as the Phantom too. They don't have fireworks chemistry, but they're ok together. The rest of the cast, including Simon Gleeson as Raoul, is a mixed bag. I will say that the Phantom enjoys awesome entrances in this show. I also appreciated that Webber and company limited the use of old, well-known songs to brief splashes, instead of relying on them so the audience connects with what's transpiring.

When it's all set and done, Love Never Dies has a few bright spots, but overall this was a forced, stupid sequel that offers nothing to the mythology of the Phantom and is not worth your time aside from downloading 1 or 2 of the catchy songs.