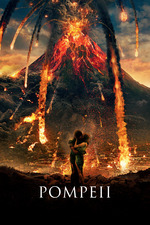 Pompeii is a rip-off of Gladiator with disaster movie cliches as a chaser. I respect the fact that director Paul W.S. Anderson went to great lengths to recreate the volcanic activity and eruption of Mt. Vesuvius to be as accurate as possible, not to mention the layout of the city. This all looks sensational, but that does not change the fact that the script is hackneyed, uninspired, and weary. The CGI is solid for the most part, aside from a chase late in the story. But this is as much about Kit Harington's abs as it is about Pompeii. His physique is the centerpiece of the picture, make no mistake. Too bad his character, and that of Emily Browning, are so one-dimensional. Their performances are blah.

Pompeii is worth watching for Kiefer Sutherland though, whose portrayal of Senator Corvus is hilarious as he chews the scenery and unleashes a cornball accent. There are a lot of actors in this that can do better: Jared Harris, Carrie-Anne Moss, Adewale Akinnuoye-Agbaje. The grand scale and spectacle is impressive, and there are splashes of cheesiness that were exciting. I wanted this to be campy enough to recommend as a guilty pleasure, but it is just too mediocre and middling. The finale is exhilarating, and the sword fights are cool, if nothing else. Pompeii does possess an old-fashioned quality that could have been more endearing. Too bad.

I have come to the conclusion that is extremely difficult to make a genuinely good volcano movie. FORGETTABLE.