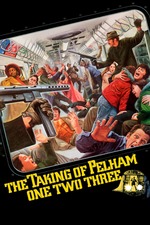 The Taking of Pelham One Two Three

Gritty 70s crime thriller trimmed of fat with zero bullshit. It's a simple enough story, almost seems boring on paper, subway car is hijacked with the armed men demanding $1 million. That's all there is to the plot and yet it feels like a movie that never stops moving... partly cuz the subway car almost never stops, but it's more than that.

You've got Robert Shaw as the head hijacker, "Mr. Blue"... which reminds me, ever notice the more 70s films you watch the more you wonder just how much Quentin Tarantino films are "homages" and how much are actually "original material"? I love QT anyways.... back to Shaw, his "Mr. Blue" is a cold calculated son of a bitch that keeps his cool and sticks to the plan even when common sense might dictate a little leeway on his part.

On the other side of the radio, the transit cop that is dealing with the hijackers' demands is none other than Walter Matthau. Sometimes you need to watch a movie like this to be reminded just how much you miss certain actors. He's Lt. Zachary Garber and he's practically playing a game of chess over the radio with "Mr. Blue", a man that is almost impossible to outsmart. Almost.

Like I said, the movie seems simple on paper but feels like it's in constant motion while keeping it's tension up. The key is that you feel like the hostages are real people and that the hijackers are running their plan like a well oiled machine which means people will die if their demands aren't met on time.

If I had one complaint it would be that you see the final moments of the film come a mile away. It's setup is hard to miss, but at the same time Walter Matthau's big ugly mug prevents me from hating those final frames.