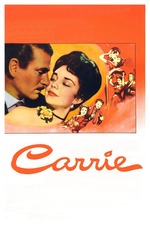 Lies can break you down, but life can also be unexpected as so does the Karma. That seems to be the core theme of this melodrama by William Wyler starring Jennifer Jones and Laurence Olivier, the story of a woman seeking for success and a man with many promises and a big impediment that gets on their way and will eventually drive one of the parties to the ground.

The duo is magnetic on screen. Jones embraces the melodramatic nature of the film with class, and Olivier by now can play any good role while on autopilot, though he chooses to try and the result, lets just say, you will find yourself whether to root or not for him, all because his striking persona and often charm gets displayed on screen.

The custome and production design are great, but its the way how Wyler plays with the camera that perhaps makes it stand out a bit of the bunch. There's a scene on a train station where we get a travelling in that for anyone may look insignificant, but for me it was a subtle technical way of almost letting us into the scene at the moment, it helps the next shot its a closer shot.

All in all, while it falls victim of the many melodrama and sometimes everything can feel a bit too theatrical for its own good, Wyler still shows he has a good hand for drama and translating soapy tales into something a bit much special.