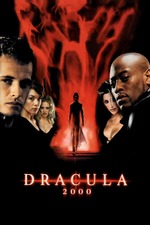 "Sorry Sport, I'm An Atheist.
[a dagger pops out of the cross's base]
God Loves You Anyway."

Ok, but how and why does young Gerard Butler looks like Gavin Rossdale?

I finally got to see this dracula iteration after 21 years. This is a version that always intrigued me when I saw it in the video store, on the movie screen, or even in the record store, due to its simple yet attractive cover. In part due to age, and in part because my mom has never been a fan of vampires or horror in general, it has taken till now to see this film.

Despite not being as good as Nosferatu or Francis Ford Coppola's version, it is certainly better than the version we recently saw on Netflix. Although Butler's Dracula is just a guest in his own movie, the movie around him is still pretty fun. Craven is listed as a executive producer, and in many ways, Lussier does a great job of capturing his campy and somewhat subversive spirit. It can be seen in the music, the way the characters are written, and especially in much of the script. Although the editing and the soundtrack place it firmly in the 90s and 00s, it is not in a way that is strenuous with quick cuts and flashy editing like in a William Malone film. It's more like Queen of the Damned, but less musical and way, way, way less sexual.

All in all, those looking for a version of the iconic vampire that fits the serious and classic style of the novel will be quite disappointed, but for those looking for something more entertaining and campy, I highly recommend.