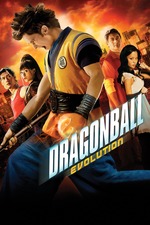 THE FOLLOWING IS BROUGHT TO YOU BYJacob

Oh, Dragonball Evolution. A product of its time, that did everything it could to capture the slapstick sensibilities of its animated counterpart, but feel miserably, because you see honey, you are a nihilistic stuff of Hollywood who hoped to capture some bucks by exploiting a popular (trademark if you are from Latin America) 90s TV show. And differently to, say, Death Note or Ghost In The Shell, at least you try to bring some representation in many of the roles, except the most important ones like... you know... the lead?

Oh, Dragonball Evolution. You had a pretty interesting cinematography and visual effects, but someone in the editing room didn't know how to place them together. And by "someone" of course I am talking of a studio exec of a producer.

Oh, Dragonball Evolution. How can you have the amazing Stephen Chow and the great James Wong, and still be bad? Though now that I think of it, maybe all the zanyness was because Stephen Chow, which then leads me to wonder how the hell he could do such a horrible job. Like bro, you made Shaolin Soccer and Kung Fu Hustle!

Oh, Dragonball Evolution. Really, did you look for the dubbing voice of the original animated series to voice Justin Hartley and make me think he was Goku... that's soo low.. but well played. Unfortunately while well played that didn't make any of the mostly weird acting any good - which it sucks because most of the cast has proven to be pretty talented in other things. Chow Yun-Fat was awesome tho....

All in all, oh, Dragonball Evolution. There's so much to say, and so little time. I could follow the lead and give you a half rating, or one star or one and a half. But I don't think your cast and crew should be exterminated, as I said they are mostly good and some even tried. You had some great scores and some of the visuals while random and clearly CGI, they weren't as terrible as I expected, and some make for some nice visuals.

At the end of the day, you may be a travesty. But something about you doesn't allow me to hate you but feeling entirely disappointed.