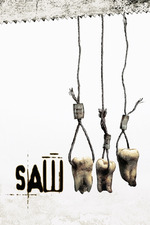 Fuera de serie: The Hardest Game Level Is The Saw one, Because You Will Never Win

This should give you an idea of just how forgettable I thought this installment was, as I still hold in high regard the fourth and fifth movies over this. I watched this movie one day at my cousin's house around the time it got released in not the best quality or paying much attention, so this felt almost like a completely new watch.

Even though the traps aren't my favorite with the exception of the body twisting machine, I find the story to be much more interesting. After two crime procedurals, we get a fresh take that will probably not happen again throughout the franchise with a somewhat tense and interesting take on the medical drama. The last contribution by Leigh Whanell to the saga does an excellent job balancing the medical drama elements with the gore and horror that have made SAW what it is today. There was an interesting moral dilemma our main character had to confront, and the final twist in the end was really well done. For those who know what happens at the end, I was left wondering what became of that person. The quality of everyone's performance was good, from Bahar to Angus to Shawnee to even Tobin, who lays on a bed for the most part, but I found his physical performance to be pretty effective.

All in all, though it falls short of the two previous entries, it still offers a lot to enjoy, and the changes in setting and story make for an interesting approach to the moral aspect of the franchise that seems to get shattered as the series progresses.