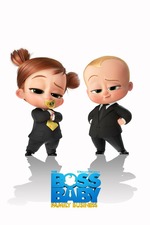 There are probably a few people in here who have heard me mention this, but the only movie I ever walked out of a theater has been Bob Clark's Baby Genius. Furthermore, I remember being extremely pissed off when my mom insisted that we watch that movie. For a kid who was obsessed with movies even then, you know that’s very telling.

The reason I say all of this is that, in many ways, this movie and the original are basically animated versions of the aforementioned film. Thus in many ways I should have joined the cynical crowd and loathed this movie.

But I can’t. I mean, why should I? With the first, the writers and director were allowed to be unhinged and rarely held back, as you as an audience you had no idea what crazy idea the movie would have with what it's layered premise had in store for you.

The sequel does what most sequels do and goes bigger, arguably better, by discussing the fact brotherhood is not that simple and as we age, we may grow apart and whatever bond we originally had may dissipate as adulthood replaces us with its busy lifestyle. Also, our villain gives us a look at how brilliance without maturity can lead us down some very dark paths. Without love, brilliance means nothing but loneliness. Sure, it's a kid's movie, so the ideas don't carry during the whole film, but they're still interesting.

The voice casting is still really great. Goldblum's off-the-wall persona matched the animation's weirdness and offbeat quality perfectly, as you got the impression the role was even prepared for Jeff from the get-go.

All in all, an equally entertaining and bizarre film that contains some kids friendly antics that will bring a smile to your face if you haven't lost your inner child. Occasionally, I was even moved to tears by its incredible sweet nature.