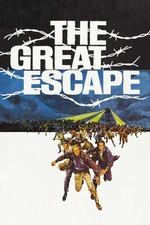 A group of officers during the WWII try to break away from a Nazi camp, in this epic based on the nonfiction book.

After many years hearing about this film, I finally got to find my way to watch this, and I can kinda see why it has received so many praises throughout the years. The story almost plays out like a big heist movie, but set during the war and perhaps with higher stakes. The fact it is based on a true story adds more to the excitement.

The cast is as epic as the feature itself. Though I was a bit too disappointed when I realize McQueen barely shows up on the film. It all felt like false advertisement. Though the few scenes and sequences he shows up, he steals the spotlight and makes the best out of it. The rest of the cast are really great as well, some of the flaws on their persona make it for some good suspenseful moments.

If I am being honest, the whole set up was a bit too slow and drag a lot for me. Its not when they manage to escape and we get to see the aftermath that things get much exciting and entertaining,

All in all, while it didn't fully live up to the hype it has built throughout the years, it was entertaining enough. The big cast of both great dramatic thespians and action heroes makes for a very interesting round of performances.