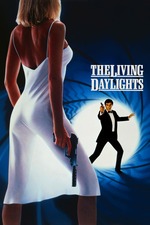 Following seven films, Roger Moore hangs up his gloves, leaving the door open to someone else to take Roger's place as the now iconic agent 007. It was ready to be handed over to the actor who would become James Bond two films later. Although due to some conflict with certain popular TV series, Timothy Dalton instead had his chance to delight the audience with his skill both in action scenes (which he supposedly did a great deal of) as well as his acting, as the franchise was ready to bring a new approach to the character.

Though the agent continues to exhibit much of his distinctive humor in this new installment, it feels unquestionably less silly and more campy than before. There is a clear balance between the comical and the serious, evident in the silly paintball game that quickly turns into an exciting action scene.

Speaking of which, thanks to this young and fresh new blood, director John Glen had a better shot at coming up with much better and thrilling action scenes. Dalton's agility immediately comes into play, which adds to the fun of the action. Whether is the sequence in the snow or the scene where Timothy jumps through several buildings. It is the first time you realize our agent is more than just a man of arms, but action hero.

All in all, a vast improvement over the many previous installments that came before. The series takes on a new direction from being a classy spy film to a really good action thriller. To be honest, I prefer this far more.