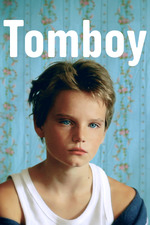 So after having meet her work on Portrait Of A Lady On Fire and the world of teen romance with Water Lilies, I guess I am doing a morning double feature with Sciamma. To be honest I entirely forgot Girlhood was directed by her, so I guess fans are in for some sort of a treat thanks to a happy accident.

But yeah, this was a really movie that dives deep into some of the director's trademarks, especially how most of her work tends to lean more towards the psychological, while also focusing on the themes of identity and sexuality (though this one leans towards the former).

Zoé Heran's performance was everything on this movie. The way she embodied this character to the point it make you believe at times she was a boy called Michael. Its on the sweet nature with her sibling and the moments of silence where Zoe simply kills it.

Technically speaking, the cinematography as to be expected by now it was really good. The direction and tone of the film at times made everything feel like a dream. And I loved how Celine explored the themes of identity and sexuality in here, especially the way how she unfold to audiences, you know, that Michael was Laure, etc. Moments that might come as heartbreaking to some, like the whole "Mom's Neighborhood campaign" and that ending was amazing. Though I am still wondering, what it meant? And I guess this might fall into a SPOILER, so yeah, stop reading here if you haven't seen the movie... but what exactly does Michael coming as Laure to Lisa entails? Does it mean Mom won in the end and Laure accepts herself as a woman? Does it mean she still identifies as him, but now will try to be more honest?

All in all, a sweet coming of age story that might certainly not be for everyone (because its themes and pacing), but I definitely go and say give it a try.