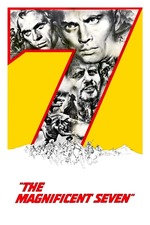 This was on my “I can’t believe I haven’t seen this” list and I wish it had stayed there. It cited as one of the greatest Westerns of all time but I found it to be one of the worst I’ve seen in a long time.

The acting is either completely cold and lifeless (Yul Brenner, James Coburn—how do you make James Coburn boring?!?) or completely over the top (Horst Buchholz, Robert Vaughn). How you have this cast and misuse pretty much every member of it is beyond me.

I might be inclined to say that the action scenes haven’t aged well but there are other movies from the same period with amazing action scenes that don’t feel like a community dinner theater production of a Western so I think they’re just bad.

It cribs the plot from The Seven Samurai but manages to make everything feel extremely cheap and coincidental, down to the Seven arriving just in time for the village’s founding day celebration.

One positive is that unlike The Searchers it wasn’t so chock full of intentional and unintentional racism that I was actually able to finish it, but “less racist than a John Ford movie” is a pretty low bar to climb over.