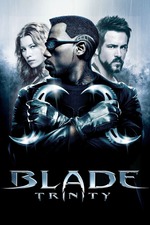 Blade falls into trap were he kills a human, instead of his usual vampires, thus the FBI is after him. Nightstalkers and Blade join up to take down Dracula. A couple of new faces are included in this movie, Jarko Grimwood (HHH), Hannibal King (Ryan Reynolds), and Abigail Whistler (Jessica Biel). Jessica Biel and Ryan Reynolds are mediocre in this movie, at best, they come off as silly and sleazy. Blade Trinity is not the strongest of the three Blade movies, story gets silly at times. Lots of gun and sword fights, the great action is still there, due to Reynolds you'll hear a lot more jokes in this movie than the previous two. Like I said, it's not the best of trilogy but worth a watch nonetheless especially if you like Blade.