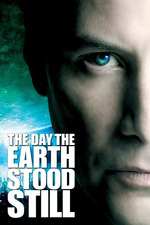 The Day the Earth Stood Still

We all know how lazy Hollywood can get not coming up with new stories or ideas of their own, rather to borrow ideas from movies long past. However, I did not watch the original from 1951 this movie is based on, so perhaps take this review with a grain of salt. Right off the bat you can tell this movie invested a lot of money, on paper a good hand of actors/actresses. These include: Keanu Reeves (Klaatu), Kathy Bates (Regina Jackson), Jennifer Connelly (Helen Benson), Jaden Smith (Jacob Benson), James Hong (Mr. Wu), John Cleese (Professor Barnhardt), and Kyle Chandler(John Driscoll). However, some really play their roles heartily (Reeves, Connelly) and others not so much (Kathy Bates, Jaden Smith). Jaden Smith overacts and it's unbearable to watch, much like his previous movies (The Karate Kid, After Earth). Kathy Bates is tame, unfitting, and unlike her usual roles a badly played character. There's suspense even if not in the highest regard, but enough to entertain. The ending is a little perplexing, but I don't want to spoil that. The Day the Earth Stood Still (2008) was for me enjoyable to watch, it's not a highlight for any of the actors mentioned and it would have done much better without Jaden Smith (like all of his other movies). I can only guess that compared to its original counterpart this adaption is a very different depiction and doesn't actually match everything to the teeth.