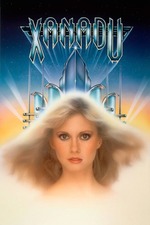 You know it's funny, I thought I hated this movie.

It's the often, and quite unfairly, maligned film that served as a cinematic dividing line between the 70s and the 80s. It is thought of as a dumb, cheesy movie with a weird premise. A dumpster fire of bad ideas and execution. But it's only sins are that it absolutely loves the disco era aesthetics that became passe right when it was released and it isn't afraid to be goofy.

With the perspective of time, Xanadu is a well put together musical. With amazingly colorful photography and art direction. Great costumes and dancing. Great, poppy as hell, music from Jeff Lynne and ELO. There's even sweet animated sequence by Don Bluth.

There is nothing in this movie that tips the scales as far as weirdness or cheesy filmmaking. At least as far as musicals go. And like most musicals, it's a resoundingly happy film.

That's really it. There isn't a cynical frame in this film. Everyone involved in it was fully engaged. All the movie wants to do is breathe some color and magic into the world. It's hard to hate it just for that.