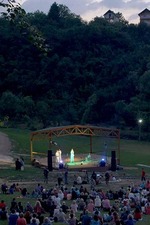 From my TIFF Wavelengths coverage for MUBI:

At first, Drljača’s accomplished documentary may seem a bit conventional for Wavelengths. But then, when you consider the straightforward mode of address that defines many of the films selected for TIFF Docs—and that’s phrasing it with as much diplomacy as I can muster—it’s clear that The Stone Speakers is right where it belongs. An examination of various ways in which cities and towns in Bosnia and Herzegovina have struggled to generate economic and cultural resurgence in the postwar period, The Stone Speakers recalls the work of fellow Wavelengths director Sergei Loznitsa. This is a film about how nostalgia, spirituality, and in some cases the landscape itself, are packaged for consumption.

Starting in the town of Medugorje, Drljača shows us how a massive Catholic youth festival has emerged because of a late-80s “miracle” in which some local schoolkids claimed to be able to see and speak with the Virgin Mary. From there, we travel to Visoko, where “energy” from an Ottoman graveyard has been reconfigured as the Pyramid of the Sun, a place where the rocks of the landscape are said to hold mystical healing powers. Next to Višegrad, on the Drina River, where filmmaker / cultural impresario Emir Kusturica has build Andričgrad, a massive cultural complex dedicated to then-Yugoslav Nobel laureate Ivo Andrič. (Kusturica, with customary humility, depicts himself in a large mural, struggling to create the complex, and has named Andričgrad’s twin cinema the Dolly Bell.)

But then, as we get to the literally sinking town of Tuzla, we see something quite different: a place where the populace is devoted to actual historical memory, not the commodification thereof. And subsequently, within our global age that prizes monetization over humanist values, Tuzla is a virtual ghost town. Drljača’s formal techniques throughout The Stone Speakers emphasize the ways that the land and its history condition the choices that citizens make for their future, particularly his repeated use of extreme long shots. This is a film in which everything refers back to the deeply rooted context of decades and centuries, and the question of whether “moving on” means accepting that context or attempting, against all logic, to make a radical break with linear time.

NOTE: I got a very kind response to my review from Drljača, who politely took issue with my reading of the final section of the film. He noted that the celebration of anti-fascism in Tuzla is bound up with anti-Communist sentiment, and veneration of Marshall Tito that stalls out any contemporary leftist politics. So Tuzla is stuck in its own historical time warp, unable to move past specific traumas of the 20th century.