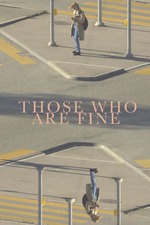 Those Who Are Fine

Tentative grade; could go higher. I decribed this debut by Switzerland's Cyril Schäublin as an unlikely blend of Alain Guiraudie's deadpan absurdism and the precision on Ramon Zürcher's The Strange Little Cat, and on reflection I think I stand by that. The opening moments are simply astonishing in their visual subtlety. Schäublin plays with scale and isolated objects in such a way that we cannot figure out if we are looking at something tiny or huge. And one brief moment, when a white truck passes by a traffic light pole, is presented in a framing so unusual as to virtually define the Formalist tenet of "defamiliarization." (It looks like two credit cards floating through space.)

There's a plot, sort of. A young woman (Sarah Stauffer) who works in a call center starts chatting up elderly women on the line, soliciting personal information from them. She then uses this data to swindle them. But Those Who Are Fine takes a surprisingly agnostic view of this crime, and in fact seems to place it on a continuum with the telemarketing itself, as only a more extreme, more direct form of robbery. As we see, the callers wheedle the elders to up their life insurance, or buy internet service they probably don't need.

Meanwhile, the police are looking for the criminal. But as they go through their daily rounds, all they talk about is how they need new cell plans, and how they have heard all about this new company called Everywhere Switzerland -- the exact firm and product the telemarkers are hawking. Schäublin has created a portrait of Zürich in which everyone is either a buyer or a seller of the same services, and nothing else seems to occupy the citizens' thoughts.

This perhaps leads us back to the film's rather cryptic title. The telemarkets are selling "coverage" of various kinds, and everyone is only too happy to be sold to. This is the general state of affairs, "Everywhere Switzerland." If Ruben Östlund's films are portraits of the underbelly of Sweden's happy liberal-socialist veneer, then Schäublin is depicting his own country as a permanent doldrums, deadened by capitalism and neutrality. Everybody's fine, but that's about it.

Flight of a Bullet