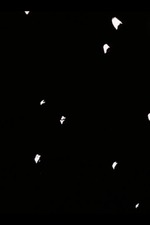 From my TIFF Wavelengths coverage for MUBI:

In the past I have compared Laida Lertxundi’s films to those of Jim Jarmusch and Aki Kaurimäki, largely because of her preference for laid-back atmosphere, rock and roll, and rigorous shot construction. But with Words, Planets, I realized that Lertxundi might be the Howard Hawks of the contemporary avant-garde.

At first glance, this looked to be a minor film, not quite as bracing or original as some of her others. But with multiple views, I realized that this is a meta-commentary on the artist’s working method and milieu, a frank admission that every Lertxundi film is in its own way a “home movie.”

At the start, we see images that recall previous films of Lertxundi’s—cacti, color-coordinated outfits and fruit, arid landscapes. But then we see someone scratching and punching holes in a strip of film, followed by the passage through the gate of the very filmstrip we just watched being manipulated. At various points we see both the film we are watching and the film itself being made, usually by multiple performer / makers.

Lertxundi emphasizes that her work is a collective process, the residue of fun times with good friends. We see this in the segments of portraiture that often begin seriously and then lapse into goofy smiles. We hear this obliquely acknowledged in the reading of the logic puzzle, all about who can associate with whom and whose relationship with who is in what state.

And we see this, finally, as we watch previous portions of Words, Planets being projected on an apartment wall, casually, like a vacation reel. Even the presence of a newborn baby seems to indicate that Lertxundi’s work, far from being artworld-hip, is simply an agglomeration of things and people she loves.

If this film feels “minor,” it’s because it’s an indication that all of Lertxundi’s films are minor, in the Tom Gunning sense of the word. They make no grand claims to universality. Instead, they have always simply invited us to spend some well-structured playtime in Lertxundi’s corner of the world.