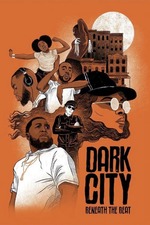 Dark City Beneath the Beat 2020

Part 1 of my review is on the film, part 2 is a personal diary.

This is a fav automatically for the fact that it is a full fledged film on Netflix that has people rocking off in it. But seriously I love and appreciate the shine this puts on so many artists in Baltimore of various types. Big love to TT, Kotic Couture, DDM, Blaqstarr, Scottie B, The Crown… everybody. I think if this is your first intro to club music it’s a nice introduction, definitely gives you good groundwork. But it’s missing some of the songs that I think are classics of the culture, but music licensing and all that. I was a little weary of the LA part of the doc, wish there was less there but I appreciate where TT tries to spread the love in a bigger city, still makes me a lor sad tho that Baltimore still isn’t viewed as the next Atlanta or some shit (but hopefully less capitalistic!). Also feel like this shines, a lot like club music and dancing, when it’s raw and unrefined in its Baltimore hoodness. Also I watched with my parents and def got scared I was gonna be in the shots filmed at the Versus show at the Crown lmfaoo.

My relationship with Baltimore Club Music in some ways starts before I can even remember, before I was born in some ways too. My moms from PG County and dads from the City and I was born here but moved to the County when I was in pre-k in the 90s. But still I had grandparents in the City and I remember riding home was one of the best parts cause it would be nighttime on weekends and 92q would play Club Music. I had never been in Hammerjacks I was too little, but listening to Scottie B and Miss Tony and Rod Lee, I could teleport to the dance floor sonically. In elementary in the 2000s we would get Club music playing on the radio at lunch, a legacy of the late/great K-Swift (RIP). And it was such a communal feeling, thinking back I realize I can’t remember a time dancing where we didn’t form circles and gas each other up. In middle school even when I saw people learn to rock off and I couldn’t I still felt part of the performance adding to the classic 808 pattern banged out on the lunch tables. And after that in high school I remember MIA popping off with the Club sound realizing how global it had gone. From then to college I started to make my own music and connect and DJ with others going to/ playing at the Crown. Growing my knowledge of the artists historically and currently in the scene, as well as the role of queerness in the music and within myself. But lately I’ve been more lowkey, wanting to hone my craft and create for myself first, but I always wanna support the friends and family of the scene. I wonder what we can do to share this with the world like TT says. It deserves more than the slight sample in a Cardi B and Megan song, Club Music imo should be the new standard for W̶e̶s̶t̶e̶r̶n̶ ̶m̶u̶s̶i̶c̶ Global music. I’ve been considering starting a little collective of musicians out here in Gwynn Oak, real local just artists and anyone with interest of all skill levels sharing ideas and a space to express ourselves musically or any other way. Also s/o my friends who are artists taking it global, I’m not sure but I swear the animator for one scene coulda been my friend Jordan lol.