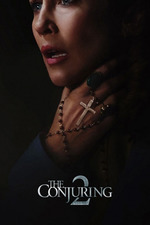 The Conjuring 2 might not be as strong as it's 2013 predecessor, but it still conjures up (get it?) enough scares to satisfy your thirst for an entertaining Summer horror flick.

James Wan's direction is once again the standout proving that he's not messing around when it comes to horror. The way the suspense scenes are handled are quite effective and will have audiences nervously squirming in their seats. Those kinds of scenes come quite often and usually coincide with the jump scares, which do work for the most part.

It's obvious that James Wan likes to take creative ques in his films from other classic horror films. While the first one had obvious homages to the original Poltergeist, this film pays homage to The Exorcist.

Possibly the most shocking thing about The Conjuring 2 is that it actually has a lot of heart. In particular there's a scene involving Ed Warren (Patrick Wilson) singing and playing the guitar to the children. It was a shocking but welcome scene to this otherwise dark film. There's also a bit of humor in the film as well and surprisingly enough it flows with the rest of the film and is used as more of a comedic relief.

Patrick Wilson and Vera Farmiga are once again great as Ed and Lorraine Warren, both performances are also a bit stronger than they were in the first film (which were solid to begin with). Newcomer Madison Wolfe is excellent in her role along with the rest of the child actors in the film.

Though the film runs into it's problems in terms of playing it safe. It really felt that Wan was trying to recreate the first film with a different story but similar plot beats. This unfortunately leads to less character development involving the new family. It felt that the only character that was fully developed was Wolfe's character. There are certain things that the first did better and creepier such as a new music box in the form of a zoetrope which doesn't give you the nervous itch that the music box in the first gave us. Some of the visuals are also a little too fake-looking and it was hard to tell if it was intentional.

Overall while The Conjuring 2 isn't as good as the first film, it's still effective in the terms of scaring it's audience. I'd highly recommend checking The Conjuring 2 out, especially if you're a fan of the first.