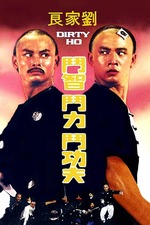 "All I've ever wanted is to just be surrounded by paintings, wine and kung fu..."

I hear you, Gordon Liu. I hear you.

Anyway, yes, I KNOW. Dirty Ho has a title that while perfectly acceptable in 70s Hong Kong has different connotations in the modern west. Get that out your system now, along with the fact that the other main character is called Wang.

Right, let's take a look then at arguably one of the best Shaw Brothers movies of the era.

The film opens in a floating brothel, where jewelry dealer Master Wang (Liu) is entertaining some ladies. Across the room, an upstart known as Ho (Wong Yue) gets annoyed at being upstaged by the wealthier, more sophisticated man and they begin competing to see who can give away the most money. When the police show up, it soon becomes apparent that Ho is a thief and his fortune ill-gotten. Rather than sending him to his doom, however, Wang takes an initially unwilling Ho under his wing and tries to steer his life back on the right path. This buddy/mentorship comedy plot ramps up when Lo Lieh appears as a mysterious bad guy who wants to kill Wang. Intrigue and twists abound, as secrets that threaten the Manchu royalty are revealed.

Dirty Ho has a great story by martial arts standards. It's well paced, surprising and actually manages to be funny in all the right places. It's gorgeously shot and the kung fu is OFF. THE. SCALE. There are so many inventive fight scenes here, from the "four cripples" scene near the start to the breathtaking Lone Wolf and Cub homage at the end, but where it shines is the "stealth" kung fu scenes.

Initially, no one knows that Master Wang is a martial artist so there's a few scenes where he duffs people up, mid-conversation, without them even knowing, and the choreography here is so precise and technical, it's an absolute joy to watch. In particular, is a gleeful scene where he imperceptibly moves Kara Hui's body like a puppet so she can fight Wong Yue. There's a lute involved for added comic effort but all three fighters are on absolute top form and this has to be one of the most joyous scenes to watch that I've come across. Likewise, the "wine tasting" in which both participants pretend to be having a jolly conversation about the origin of various grapes while discreetly trading blows is unforgettable.

If you can appreciate the skill of physical comedy as much as martial arts, Dirty Ho will blow your mind. Even if you can't, it's a rip-roaring action caper and well worth anyone's time.