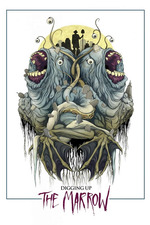 Digging Up the Marrow

Monsters being the sole reason we were here in the first place you would think more of the film would have been dedicated to filming them visually! Instead of proving the existence of monsters the film proves Adam Green and crew can't act muchless create a horror film worthy of its audiences precious time and hard earned money!

Much of the film is outright boring or annoying! The only time the film really shines is during the scenes Dekker (Ray Wise) shows us the wonderful artwork depicting the creatures or the all too brief scenes where monsters actually make there way unto the big screen!

The ending was so unforgivably bad I seriously question whether or not I will venture seeing another Adam Green film in the future!