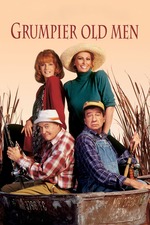 This one amps up the horny which causes the humor to be a bit dimmer in spots. The antics are lacking a bit here, someone will say a line and instead of teeing up for bit of banter, there’ll just be no retort. You can tell they’re trying everything they’ve got left for this idea by having Daryl Hannah & Kevin Pollock planning a wedding, the gentlest of antics directed at Sophia Loren trying to turn their dead friend’s bait shop into an Italian restaurant, the Big Fish through line which wraps up in the last 15 mins AND not only giving Jack Lemmon’s 95 year old father played by Burgess Meredith a fuck buddy but also lazily tossing a few mins of proto-‘The Odd Couple Part II’ in there for... not “good” measure but “fair” measure.  Speaking of the antics, Walter video tapes Jack while he nakedly poses for his wife’s sculpture, which doesn’t come back for an hour and when it does, it doesn’t make the whole act any less unsettling. Like, Matthau just was gathering shit to use against him, in a time when they’re supposed to be more friends than enemies. Sure, OK, maybe thats a natural level to go to, but why must you settle into your lounge chair and crack open a beer, to watch this video be recorded like something out of ‘Silence of the Grumpy Old Lambs’. While were on this subject, he uses the footage to embarrass him in a big box store with a wall of televisions and this elicits everyone to applaud him. Not just like one or two people giving that kind of sarcastic clap like when a waiter drops a glass, I mean the entire store just claps it out for him. This movie is like them doing both ‘Grumpier’ & ‘Grumpiest Old Men’ at once since they knew they weren’t coming back for a trilogy. Ultimately, this isn’t necessarily a “worse” movie but that’s by way of it being so overstuffed with enough crap you can’t call it “lacking”. Let’s say this is an aged take on an already old concept. Thankfully, this series can rest easy in that it left no stone unturned. Now, go to bed ‘Grumpier Old Men’. We’ll try and not make too much noise to wake ya.