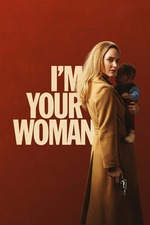 Sorta like how Reservoir Dogs starts after the heist, I’m Your Women’s driving plot points, for the most part, happen off screen. With overly stylized costumes and in your face violence, this movie felt familiar. Though instead of following around thick accented mobsters as they work their way through a cast of expendable characters, we finally get a story that focusses on how the women left behind (in film) maneuver the mob carnage too. The zoomed out plot was less important the the interpersonal nuances between the characters.

If I had one complaint, it's that some really excellent scenes were followed by really, really long lulls. I was worried for awhile that we’d spend the next 40 mins of the plot getting to know the neighbor next door—the pacing felt a bit off. But then again that's how life goes sometimes, and to some degree this movie felt like it was trying to track the life of Jean as she grows from damsel into killer.