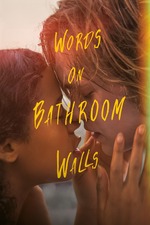 "You remember what the doctor said that just because you're a person who's dealing with this illness doesn't mean..."
"I'm the illness itself. It's hard not to feel like that when everyone treats you like one."

Words on Bathroom Walls is this year's another surprisingly good young adult movie that stars Charlie Plummer, this time playing a schizophrenic character. Although it's as flawed as expected, the film appears to be quite harmless that it never attempts to put the said illness in appalling, bad light. There's a scene where Adam (Plummer) compares his condition to another serious one that got me thinking, "Oh, I couldn't agree more, man. That's just sad." *pouts* I liked how it managed to sensitively spread mental awareness in the most clichéd way possible. I mean, what more can I expect from a movie like this? Also, Plummer just does not disappoint.