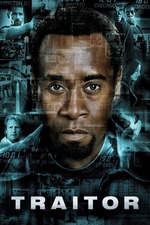 This film successfully transplants typical cold war era espionage drama into a thoroughly modern setting, with surprisingly solid results. As a genre film, it's typical, workmanlike, but as a reduction of the problem of international terrorism to a few key characters, it's wildly successful. There's a full-on fanatical mass murderer in this film (and I'm not talking about Cheadle's character,) the kind of asshole who uses innocent children to blow up other innocent children, and we are expected to feel sympathy for this person. Surprisingly, we do, and it's not through some contrived plot twist jammed in by the writer to excuse away all his actions and frustrate the audience's assumed preconceptions, it's because he's a well-rounded character. Better yet, there are no racist bigots or political strawmen on either side of the aisle, surprising since such shallow characters are so useful to create conflict and so satisfying to condemn. The film's goal is awareness rather than conversion, one would hope it is the beginning of at least a few conversations.