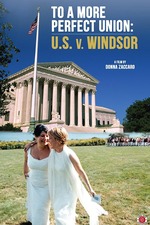 Another Jeff Toobin in a gay marriage documentary sighting, this time as a talking head *eyeroll*

Edie Windsor is super charming and its easy to be on her side about paying the specific estate tax given the homophobic principle of the matter. However, I wish Americans didn't need to be sold on fighting injustice by relating to the rich hoarding gratuitous amount of money given our crumbling infrastructure and predatory economic practices towards people not of Windor's class stature. The documentary tries to imply she would not be financially sound for paying such a large tax on her estate property but really she could afford it given her actual net worth (conveniently left out of the film). Her straight friends would have never had to pay that yes, but why they aren't paying more for the public good is not questioned at all. I would love to watch a documentary about the relationship between legally recognized relationships and the tax code to dissect why we are heavily incentivized to enter marriages one day no matter what we actually believe about commitment or involving the state in those commitments one day.

That being said, it does show a lot about the dominant cultural conversation of the early 2010s around marriage (even if their recap of previous actions up to that moment left a lot to be desired, such as ommitting trans people's specfic roles in the LGBT activism or not actually saying Storme DeLarverie's name when referring to her, etc.). It's just from the perspective of people who can telephone a friend to tell their friend Bill Clinton to enlist in criticizing his own triangulation to help him win an election and using that PR as a tactic. Most activists and lawyers can't just do that, you know?

DOMA needed to be struck down and I'm definitely grateful for Windor's and Roberta Kaplan's collaborative role parrallel with the battle to overturn Prop 8 (which I wish was discussed in more than a passing reference in this documentary). Their personal relationship from this case is also very sweet! The audio of the Supreme Court is essential and makes the whole documentary in my opinion. I just wish the tone and outlook of the events were'nt presented in such an intensely assimulationist way, like they were trying to make my high school Moral Decisions teacher proud they made up for not being "ideal" but were "elevating" themselves by performing heteronormative values.

The Passionate Pursuits of Angela Bowen