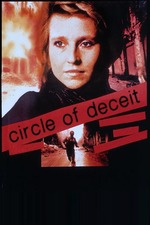 A distressingly slick 1981 feature by Volker Schlöndorff (The Tin Drum), filmed in the smoking rubble of the Lebanese civil war with an attention to elegant composition and camera movement that seems more appropriate to a big studio musical. The irrational conflict then shattering Beirut registers with a texture and immediacy far beyond the power of the television images we're accustomed to, yet Schlöndorff uses the war as an abstracting, metaphorical device—as a projection of the inner turmoil of his protagonist (Bruno Ganz), a German reporter in midlife crisis. Hanna Schygulla, away from Fassbinder here, proves to be a sharp, womanly presence—a Barbara Stanwyck for the 80s. And there is a nice bit by French character actor Jean Carmet, who plays a tawdry war profiteer as a figure out of Graham Greene. In subtitled French and German, as well as English. 108 min.