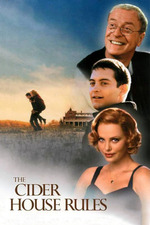 Impeccably crafted and utterly impersonal, Lasse Hallstrom's adaptation of John Irving's novel has many of the qualities Oscar is known to appreciate: It's a coming-of-age tale, about an orphan (Tobey Maguire) raised by a kindly doctor (Michael Caine) to become a gifted, if unlicensed, obstetrician; he has a love affair with an engaged older woman (Charlize Theron) and discovers the joys and perfidies of adult sexuality. The 1940s production design by David Gropman is perfect, and Oliver Stapleton's photography of the rural Maine landscape is ravishing. But the exercise still feels empty and academic, more a matter of going through the standard Hollywood humanist motions than developing the material from the inside. Good work all around—but who really wanted to make this movie, and who really wants to see it? Delroy Lindo, Paul Rudd, Jane Alexander, Kathy Baker, and Kate Nelligan round out the appropriately prestigious supporting cast. 125 min.

The Woman Who Dared