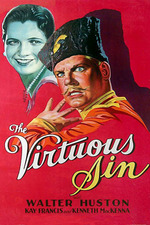 While not the vehicle that originally put Francis on the map, it's the one that ultimately gave rise to her stardom. Friend and avid supporter Walter Huston, who plays the lead, won her the opportunity by singing her praises in a gesture of kind advocacy. It's clear that he had an eye for talent, as Kay (who was very much an inexperienced young actress) easily holds her own and provides a spirited performance.

She plays Marya, a Russian woman who settles for a platonic marriage arrangement despite her eminent lack of attraction. Kenneth McKenna (who would become her real life husband) plays her enamored partner, a scientist who is drafted to fight for Russia at the beginning of WWI. He's vocally opposed to his involuntarily enlistment, which eventually lands him on death row for treason. Marya, despite harboring no romantic sentiments toward him, feels it is her duty as a wife to try and spare his life. To accomplish this, she sheds her good girl image to take up work at a seedy brothel frequented by the General (Huston) and his soldiers. McKenna's fate ultimately rests in Huston's hands, and Kay knows the only chance she has at sparing her husband's life is through seductive pretense.

She succeeds in catching Huston's eye, strategically winning him over with her incongruous behaviors (Francis masterfully shifts between coquettish and dismissive depending on his disposition). What she doesn't plan for, however, is for any actual affair to blossom -- and inevitably it does. Yes, she has succeeded in wearing down the notoriously austere and hardened war hero, but realizes her own feelings sabotaged any valor borne out of her game plan. McKenna's life is ultimately saved, but he is irrevocably offended by the realization that his life was spared only thanks to his wife's transgressions. It's foolish and hypocritical, considering Kay gave him full disclosure that their marriage was strictly a loveless one (depicted masterfully in the first scene of the film).

The sound quality is poor, but the picture itself holds up quite well and remains engaging and fresh throughout its 80 minute runtime. Huston and Francis are excellent together, whereas McKenna is the weak link. A highly recommended watch, particularly for fans of Francis or Huston.