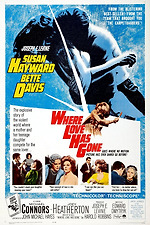 Where Love Has Gone

Somehow, this proves to be even more hallucinatory upon second viewing, and twice as enjoyable. Given that because I already knew the general plot, I was able to really dive in this time and instead focus my attentions on the specific histrionics of Davis and Hayward. Both women are plenty prone on their own to over the top nuances, but when conflated it plays out in a screaming match rife with palpable tension, glaringly true to their ill rapport behind the scenes.

The most fascinating aspect of this film is that it never quite is able to decide what exactly it wants to be. It opens in a Sirkian vein, complete with a swoony, titular ballad and triumphant technicolor, and wastes no time in getting to the meat of the story. However, the pacing is strange and it was certainly a loaded choice to opt for those wave-like transitions that segued into sequential flashbacks. Instead, it proved counterproductive to the film's cohesive whole and played like a choppy, abrupt splicing of odd ends.

Bette Davis is a proto Godfather type mother to Hayward's thinly veiled Lana Turner, basically buying the influence of anyone and everyone whom she desires. Her staccato hysterics paired with the hilariously bad dialogue and comically inconsistent soundtrack (which waxes everything from Hitchcockian to innocent and frolicking) solidifies her as little more than a comic villain. Hayward is not much better and flings her lines with forceful vehemence. It should be noted, sadly, that they are two of the stronger performers in the entire cast. The carcicaturizations borne out of stylized overacting robs the movie of any slight credibility it may have possessed.

It's deliciously terrible and entertains consistently from start to end. Definitely not a film I would recommend for the cultured palate, but it's great fun -- particularly if you're impartial to Davis, Hayward, or both.