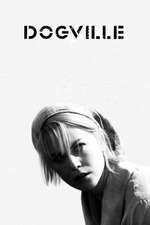 it’s difficult being adopted, and that is exactly what dogville’s grace is. grace escapes her troublesome family and happens into the thirty arms of another: the family of dogville. and that’s exactly how grace characterizes her adoption, as “somebody happening by, revealing their frailty.” taking in another mouth to feed and all the risk that comes with grace’s can be admittedly burdensome to an established and balanced unit. after grace is coaxed with care from her crime family escape, her problems are not solved. grace is not saved or given much support by dogville and its people—even those who take a liking to her—her purpose becomes establishing a newfound balance in dogville solely because her presence there upsets every person and system in place, and that upset begins to reveal itself in a steady riling of fits.

the town of dogville is constantly asking a heavier counterbalance from grace to justify her being there. her harbored existence becomes ultimatum and just as unstable as her birth family, if not worse with the reluctant abuse she endures. dogville issues its bare-minimum kindness to slight any question on their neglect and mistreatment of grace, just as an adoptive family may justify any action against their new child because they believe their household unbalances are the newest child’s problem. the adopted grace is not considered as a child of dogville and, though it may take a moment to realize, she will never be considered as such no matter how much she attempts to balance her way into a stable and safe living environment.

for how naive grace is, she immediately recognizes that she needs to get out of dogville as soon as possible. her entire habitation is permeated with phrases that voice her desires to leave and remove dogville from the pressure she believes she exerts on it. but grace’s “i should leave”s are always met with astounding no’s for how much trouble she is told to be causing. it is easy to mistake dogville as generous for its continued support in the face of grace’s depravity, but this struggle is all manufactured to manipulate grace into buying into the idea that dogville has her best interest in mind and she should be forever thankful for their vampiric hospitality. through these mind games, grace’s best interest slowly sours into cementing her place as lowest-of-the-lowest-of-the-low in dogville.

though grace in her infinite naïveté is not to blame for her terrible treatment, she does become part of the blame by choosing to extract exaltation from her mistreatment rather than acting against her vulnerable tendencies. grace is never critiqued on her vulnerability or ability to be taken advantage of because none of the figures in her life will willingly  call attention to their means to exploit her. instead, she is admonished and demonized for recognizing her mistreatment and accepting it with a knowing saintliness. grace is in a nasty double-bind where not only can she not fight against her mistreatment, but also she cannot own her abuse and use it to empower her through its psychological and physical lashings. while grace’s situation is relentlessly reprimanded as a product of her exalting arrogance—a truly negative trait—the roots of the atrocities leveraged against her are firmly placed in the naive belief that her bottomless kindness will reflect onto her from others—an absolutely golden-hearted trait, fit for trier’s golden heart trilogy which released periodically before dogville, but not coincidentally.

despite being of an incomplete trilogy of its own, dogville exhibits, examines, and dissects the horrors which befall golden hearts and offers a complex revenge tale as comeuppance for naive hearts, showing that the loss of golden innocence is a viable option in circumstances of severe tribulation. dogville’s mature morals are flawed, incongruent, and painfully human, which levels itself closer to true tales of neglect, the naive, and the arrogant. dogville opens adopting arms to relate my unexplainable hurt and disseminates its weight from my heart.

like grace, i was adopted from my troublesome family into another at the naive totality of my frailty. every moment i see her as a non-citizen in dogville, i see myself as alone in a family that found every reason to make me think i wasn’t their child. every moment i see grace say she should leave, i see myself in the same monotonous repetition. every moment i see grace lulled back into uncaring shelter, i see myself plain and afraid in every charming lie that trapped me again. every moment i see grace in the thick of her neglect and the harmful relishing she must gorge on to justify her pain, i see the arrogant weight i put over myself to earn my place in a home that never recognized me as a welcome inhabitant but as a self-serving tool. when i see grace destroy her dogville problem, i see myself frozen in the presence of my pain. it’s said that grace possesses the god-given ability to look nothing but forward, however this strength forces her to destroy every token of her past—for the best and worst.

sharing this self-destructive tendency with grace, i find myself asking her what she will do next, but i think grace’s choice to destroy what destroys us is incorrect, however cathartic and ascendant it may be. i want to choose to never be hurt again, i want to preserve my innocence even if it means preserving my pain. i want to destroy every mark my own dogville left on me, because the only evil i care lives or dies is the evil others try to place inside me. i know grace lost herself in those last moments, her naive and open heart will slowly bitter from its innocent beginnings. grace will find herself in the same situation again, having learned nothing but how to hurt more than the last time. grace does not know how to stand up without destroying. i choose to not let that be me.

this is not another film that hits too close to home. dogville hits home. it kills my siblings. it kills my parents. it destroys every memento of my family. dogville does all of this so i don’t need to. hopefully then i can hold some semblance of gold lodged inside me.

dogville burns down the place i called home.


—
i never want to see this again.