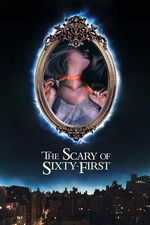 while imperfect in execution, the scary of sixty-first’s achievement is only occasionally marred by the experiential adolescence of its production. sixty-first’s tonal primacy of a never-ending roll through speculative hysterias showcases a wholly unique paranoia that constantly elevates itself alongside the film. unfortunately this entire artistic movement upward seems transactional, with its suffocating progression totally unable to hold its breath without its characters exhaling lines inside the inopportune, ultimately pulling the film and its pace downward with every gasping lunge up. there are numerous shortcomings and specks of genius, each reluctantly balancing the film into a surprising consistency for how much it wavers in quality, whether it be in delivery, writing, or artistic mission

it’s incredibly difficult not to appreciate the unabashed fear instilled into sixty-first’s sense of conspiracy, which is understandably conflated with its admissible touches of camp. regardless by which degree of real-world closeness dasha nekrasova holds to global conspiracy from their titular interest in epstein, they indicate a seriously paranoid and developed relation to forbidden discovery and the mortal danger of information. mindless emotion meets itself in sixty-first’s aural madness, where anxious panic and comedic absurdity morph into a possessed tale that grasps frantically at pop-conspiracy straws until reaching a genuine conclusion of aimless fear and helplessness in countless mazes of uncertainty that frequently accompany the reality of losing oneself while diving too deep in dangerous ideas

this permeating directionlessness, while intensely beneficial to the film’s capturing tone, does tend to lose itself in less-than-desirable positions. more than anything, sixty-first’s plays toward repeated pessimisms in male subservience and feminine humiliation are distasteful to any forming core against the sexual crimes enacted by the entire epstein ethos. its powerless struggle is effectively horrifying, however this spiritual torture leaves little to glean from other than the confirmation of some ambiguous truth in conspiracy’s dark existence. the only problem is that this conclusion does not add any more to a culture that already senses accepted reality is wrong and hidden. with how many circles of secret thought are toyed around in sixty-first’s plot, nothing comes of them other than that at least one of these lend a track to the truth. this openness, even with its poignant dedication to the bottomless uncertainty of conspiracy, leaves too many questions to be meaningful in its startling translation into film

—
i agree with most of the critiques, but i feel as if there is little consideration for the purpose behind nekrasova’s drive to create a piece of art so divisive. i hope my review sheds some artistic appreciation beyond sixty-first’s shoddy production, an effort that undoubtedly could have been better. still, i can’t believe i enjoyed this as much as i did. it could simply be from my very personal and penetrating fear from following forbidden information and those who conceal secrets, which the scary of sixty-first has a more than straight pulse on its haunting captivation. there’s an unreal dedication to this depiction that deserves rightful respect—even when there’s too much holding the emotional uniques of its narrative back—but a fair star score rings in consolation to this possessed capture of paranoid lightning, striking at one of the many taboo hearts in the psychosexual beast