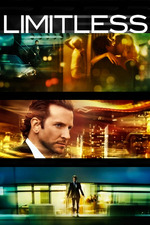 This is a prime example of a movie with an intriguing premise (one that caters to my current interests in neuroethics to boot) that completely loses itself about halfway through. By this point in time, can there JUST be a movie with this kind of storyline that doesn't resort to conventions and cliches that become more and more implausible as it goes on. It has some truly incredible moments, especially during the setup, and I can't say enough about how I love the concept, but of course... there are criminals that want the drug and Cooper gets caught up in corporate espionage, etc etc blah blah blah.

I really like it when the drug wears off and he meets others who have taken it, but then it gets far too caught up in creating tension with boring bad guys that doesn't pay off. And DeNiro sleepwalks through another role once again. I actually really like Bradley Cooper in this and in The A-Team quite a bit, but I'm pissed at the screenwriter for not taking a more intellectual approach to cognitive enhancement, and not succumb to the typical action chase movie that we've seen a thousand times before.

The Shape of Things