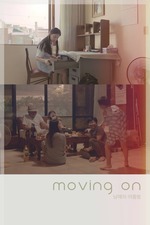 • MOVING ON moves calmly - at times too much, the film could work better with ten, fifteen minutes less - through that family readjustment that will tighten up again when the silent grandfather's health begins to deteriorate rapidly, putting the whole family on alert. One of the most interesting points of Yoon's film is her decision not to transform grandfather into a warm, mythical or especially memorable figure. He is a very old and silent man whose most active past can hardly be glimpsed in brief moments. Something similar happens with the father and the aunt: they are warm and friendly beings but they seem more concerned about money - it is evident that they have not done well in that matter - than about anything else. The film will have some other axes - the tension generated by the absent mother, the girl's suspicions that her father wants to sell her grandfather's house behind her back, a friend that the girl has at school, among other details - leaving It is clear that, along with a family drama about three generations, MOVING ON is at heart more than anything a sensitive story of growth (coming of age) about an adolescent who is forced to grow up suddenly when a series of situations they force her to have to deal with the harshest and harshest reality.

Take Care of My Cat