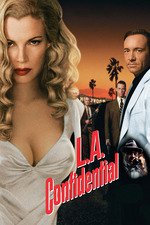 “Go back to Jersey, sonny. This is the City of the Angels, and you haven't got any wings.”

While I would never really call myself a huge fan of the styles, I seem to naturally be a bit of a sucker for pulp and noir fiction in my cinema. I suppose this is not an especially surprising revelation, considering my continued reverence for the James Bond series and enjoyment of pulp-influenced auteurs like Shane Black, and I suppose an equally predictable revelation would be that I think that, the perfectly titled, L.A. Confidential that Curtis Hanson delivered in 1997 is nothing short of a terrific film.

In q similar vein to any number of Tarantino’s dark and pulpy films, L.A. Confidential juggles an ensemble cast of big name stars in an interweaving and complicated to follow plot. To be fair, calling this an all-star cast is somewhat inaccurate considering that it was somewhat of a star-making turn for two of its leading men at the time. It is strange to try and think of a time when casting Australia’s own Russell Crowe and Guy Pearce in such high profile roles would seem a huge risk but it is certainly one that paid off very well for everybody involved. In fact, the Australian representation is exceptionally good in L.A. Confidential when you remember that Tasmania’s Simon Baker even has an early role.

Pearce and Crowe are wonderful in the film and the former in particular steals the show as the disliked and disrespected Lt. Exley. Crowe is solid too although his major American debut does seem to be made with some typecasting as I cannot help but feel he was only cast in this aggressive and psychologically challenging part because of his previous work in Romper Stomper. Regardless, I really liked how these two characters were so set apart and yet share such a similar emotional arc. The connections and themes about fatherhood were particularly interesting for me to noodle as the film rolled on.

Kim Basinger is our leading lady and delivers what I would consider to be one of the best performances of her career. Bracken is a mysterious and captivating presence as much as she is a tragic and sympathetic soul which is a great line to be walking with a female role as powerful as this. There is so much going on in L.A. Confidential that it would be an incredible disservice to attempt to break it down in a platform like this when I have barely had enough time to even fully absorb what it has to say but I do want to make mention of the exploration and discussion of toxic masculinity that inherently opens up in this particular period setting.

There is very little negative I can think to say about L.A. Confidential except that perhaps it required a second viewing to fully come alive. I watched this with people who had already seen it which helped making the catching of very quick and seemingly insignificant details that enrich the story much easier but even then I feel like I am barely qualified to discuss the work in any real depth. I loved everything this film had to offer from the perfectly pitched tone to the enviously well crafted dialogue. If you enjoy proper gritty crime dramas and detective stories with a bit of flare and a lot of passion, you are sleeping on a true classic.