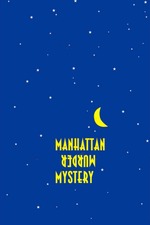 “I can't listen to that much Wagner, you know? I start to get the urge to conquer Poland.”

The third in what I want to dub the “Manhattan Trilogy” (including Annie Hall and Manhattan) is a different kind of Woody Allen film. All the usual trappings are present such as the conflicted lover, the dry wit and, naturally, the neurotic male lead but what he has done this time is put a genuinely gripping and unique crime story in the background of a typical Allen film affair to entirely ground it in a mundane reality that is seldom captured in crime fiction of this kind.

Manhattan Murder Mystery was co-written with Marshall Brickman, previous partner for Annie Hall, Manhattan and, the last of Allen’s madcap, ‘60s style comedies, Sleeper. While I am not the biggest fan of the latter, I do not think it can be easily denied that this partnership led to the most consistently good work that Allen has ever done. What is so impressive about this particular script is how well plotted the murder mystery actually is. One would probably expect a generally kind of bland crime story that is enhanced by being set in Allen’s trademark romantic comedy nightmare. Amazingly, though, both aspects are as well done as each other which is very impressive to see.

Diane Keaton, unsurprisingly, is the star of this show. Reuniting her with Allen was always going to be exciting and their double act is just as witty and fresh as it always was. Keaton completely steals the show in Manhattan Murder Mystery, fully realising a likeable and compelling character. Allen is good too though not especially noteworthy since he mastered his trademark character years before this. Do not mistake that for me saying he is any less hilarious though.

If there were a downside to the way this film is made, it is that, occasionally, the character and relationship scenes feel like they are intruding upon the murder mystery plot. While I do generally love the blend and balance between the two, there are a couple of scenes that just contribute to the themes and ideas but could ultimately be cut for pacing, I think.

Manhattan Murder Mystery is a film about embracing spontaneity and breaking apart from the tedium that life has to offer. It may not be as good as it’s predecessors but it is a fitting cap off to this particular flavour of Woody Allen pictures.