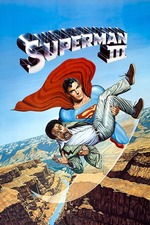 “I ask you to kill Superman, and you're telling me you couldn't even do that one, simple thing.”

The original drafts for this film included Brainiac, Mxyzptlk, Supergirl and intergalactic quests. What we got instead was Richard Pryor and the Man from U.N.C.L.E. attempting to steal some coffee.

Superman III is an attempted critique of ‘80s capitalism under the guise of a madcap comedic romp but is ultimately not clever enough to be effective at either. Christopher Reeve, who is at the top of his game in this role, is kind of wasted on a script that seems pretty disinterested in him and forces his kind of excellent turn as a Bizarro Superman onto the sidelines. Lana Lang is a likeable enough replacement for Lois Lane this time around and I was kind of disappointed to know that the set-up for a love triangle in later films would never come.

All in all, if the Salkind Superman films were an ‘80s TV series, this would be a perfectly acceptable couple of episodes but for a major motion picture, it’s boring as fuck.

A Cure for Wellness