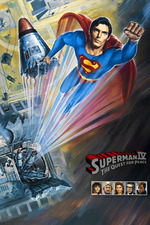 Superman IV: The Quest for Peace

“I thought I could give you all the gift of the freedom from war, but I was wrong.”

Superman IV: The Quest for Peace is almost a great film. Conceptually, the pieces are all here; a story with, not only, a strong moral centre but also a potentially gripping, personal conflict for the character of Superman, the original cast from Superman: The Movie back to reprise their roles and the largest-scale, comic book spectacle ever realised on the silver screen (at that point, at least).

Where it all falls apart seems to be purely in the execution. So far as a premise, I really do like what Superman IV has to offer. Rooting itself squarely in the year it was made, asking the question of how Superman would, and should, react to the then-ongoing nuclear arms race is a great idea and the arc he is intended to go on over the course of the runtime is solid. In theory. The strong metaphorical through-line of Clark abandoning what is left of Krypton and ultimately embracing the Earth as his one true home, just as he sees them begin on the exact same downward spiral that wrecked Krypton, is actually kind of ingenious (despite the subplot with the green crystal not exactly lining up with previous franchise entries).

Superman takes it upon himself to solve humanity’s problems and ultimately concludes that that is not his place. Fine in concept but it falls apart a bit in execution because we never actually spend enough time in Clark’s head and witness him coming to these conclusions. We do get a decent enough sense of the build-up to his first interfering but it seems like his realisation that he should not have comes entirely out of nowhere just because the film has to end. If we had a better sense of the world’s own reaction, I think that would go a long way. Superman deciding to rid the world of nuclear weapons is nothing short of being an all-powerful dictator and is the kind of move that would drastically and irreversibly damage the global political and economical climate. You would never know it based on Superman IV though.

It is weird that the big business ramifications are so poorly addressed, we do get a very minor subplot with Lex Luthor privately dealing with a handful of out-of-business weapons developers, when the other major arc of the film is entirely built around the negative qualities of 1980s corporate conglomerations. I thoroughly enjoy the scene on the Kent farm where Clark turns down a sales offer from a developer and then his continued moral stance across the film in favour of the little guy as the Daily Planet gets bought out. It is a great angle that only seems more and more contemporary as the years roll on (Disney/NewsCorp/Fairfax anybody?) but, again, it all feels too underdeveloped. Superman IV had about 45 minutes of footage left on the cutting room floor which is a shame because some of it would have largely improved the story in favour of others that were left in but the pacing would almost certainly have been wrecked.

I mentioned that the original cast largely return which is neat but their appearances range from underused to underwhelming. Gene Hackman is a great Lex Luthor but seems to be running a little bit on autopilot this time around. He is such a great actor that it barely matters but I cannot help feeling that his appearance feels largely obligatory. Jackie Cooper and Mark McClure barely contribute more than cameo appearances and both look far too old to realistically still have these roles which leaves Margot Kidder as the sole returning member of the supporting cast that is really pulling her weight. She will probably always be my favourite Lois Lane and she is just as good here as she ever was although I do think the script takes some weird liberties with her character. Why do we suggest that Clark returns and wipes her memory every time he needs advice when he could just as easily confide in her as Superman? Why bother with this back and forth of her memory? It makes him come off as far more immoral than he ought to for no good reason.

And, finally, to the spectacle. With the introduction of Nuclear Man, a complete non-entity of a character, Superman IV attempts to bring the lagest scale clash of the titans since Zod and his cronies came to town. We’ve got volcanic eruptions, battles on the moon, the destruction of the Great Wall of China and all on the budget of 10 bucks. Unfortunately for this production, then-rights holder Canon studios had more or less no money to put into, what is on the page, a huge superhero epic which leads to a lot of potentially thrilling sequences either being cut down heavily for time (the Superman train chase) or very poorly realised (every battle with Nuclear Man). It is such a shame that the film was so hampered financially and especially embarrassing when considering the high standards set by the original three, at least in the effects department.

Undeniably, Christopher Reeve is the crown jewel of this run of films and he is no less magnificent in his final showing. While offering him creative control as an incentive was ultimately not the best move at a script level, it is hard not to see that Reeve’s heart is in this project. He clearly believes in the message of his film and the power of the character of Superman. He gives all he has got in delivering another iconic performance in this role. For that alone I think it deserves more praise than it gets.

Superman IV: The Quest for Peace is often cited as one of the worst films ever made but I don’t even think it is the worst Superman film that has ever been made. This is leaps and bounds beyond Superman III and inherently deserves more respect because it actually tries. Superman III was a half-arsed cash-in on a popular film character that served no purpose than to be a star vehicle for Richard Pryor and make a bit of money off of earlier deserved clout. It is barely even about its titular character. Superman IV tries its very hardest to recapture the magic of the original ’78 classic as well as deliver a thoughtful and timely romp that revitalised a classic character in a contemporary, science fiction story. It shoots for the moon and crashes back on earth which is by no means a great outcome but a valiant effort nonetheless.