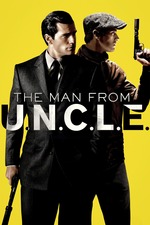 “We're struggling here. Why don't you take a shot at him?”
“Somehow, it just doesn't seem like the right thing to do.”

Perhaps it is as simple as stiff competition, being released the same year as Spectre and Mission: Impossible Rogue Nation, I do not think I have ever been more baffled by the commercial failure of a film than The Man From U.N.C.L.E. Guy Ritchie’s reimagining of the 1960s Cold War, adventure series is, to my mind, everything that its contemporary spy series are attempting to do less successfully and everything that they really ought to be.

Guy Ritchie seems to have been on a bit of a losing streak since his Sherlock Holmes films, producing, at best, commercially sound pictures with mixed to negative reviews and, at worst, commercial flops with mixed to negative reviews. And yet, somehow, nestled comfortably in the middle of this mediocre run of his career, is the consummate classic that is The Man From U.N.C.L.E. The film excels visually with a comic-bookesque aesthetic and a constant, kinetic energy. I love seeing a director just be allowed to indulge completely in the style they’re bringing to a piece and this film just has Ritchie’s sensibilities all over it. I love the way he shoots action in U.N.C.L.E. too. The quick zooms in and out during the penultimate car chase allow a sense of geography and comprehension that a lot of modern action films sorely lack.

The production design is generally terrific with some gorgeous costume and make-up designs. The colours and styles are so flashy and distinctly ‘60s. It has a great sense of style and the relationship between colours from shot to shot is excellent. This is just an immaculate looking production.

As for the cast, everybody is on top form but I cannot sing the praises enough of Henry Cavill whose performance as Napoleon Solo would put him right near the top of the list of my favourite James Bonds (if he were eligible). The character is a lot of fun with a delightfully exaggerated accent, any number of charming witticisms and a strong presence whenever he is on screen.

It is no secret from watching this that Ritchie is a huge fan of the original ‘60s Bond films. Watching this feels like watching a seventh, ‘60s Connery film without any of the budgetary and technical limitations or outdated pacing or contextual choices (blatant sexism is certainly much less prevalent). The Man From U.N.C.L.E. is a fun, thrilling and irresistibly charming period spy adventure that I could not recommend more.