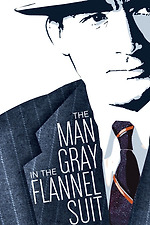 The Man in the Gray Flannel Suit

“I don’t know anything about public relations.”
“Who does? You’ve gone a clean shirt and you bathe everyday. That’s all there is to it.”

The Man in the Gray Flannel Suit is a remarkably progressive slice of ‘50s cinema. With mature and contemporary discussions of morality and mental health, the work depicts the struggles of an honest, everyday man with visceral PTSD and his growing disillusionment with his corporate and (naturally) grey world.

Gregory Peck is one of my favourite actors of his era and he brings a commanding presence to the role of Tom Rath delivering for as much authority as he does vulnerability. While he has a few moments of “theatrical” drama that might come off as wooden, I think he is truly the heart and soul of the film and one of the primary reasons to seek it out. This is a very string script though. There are conversations and ideas explored in this screenplay that are not even discussed now. The mental health discussion especially is so well done and creates some wonderful dialogue with its audience. I was floored by it.

The other star aspect is the production design which is absolutely outstanding. There are so many wonderful, eye-catching sets littered throughout The Man in the Gray Flannel Suit and I think they are truly gorgeous. The photography goes a long way toward this too, capturing the picture in a very aesthetically pleasing and timeless fashion.

All that being said, my biggest criticism for this film is in where it falls victim to outdated flaws of its era. The treatment of women begins questionable from scene to scene and the pacing does suffer considerably after the film’s first hour and a half. A lot of great scenes outstay their welcome by regurgitating and expanding upon information that the audience has already been clued into or simply doesn’t need to know at all.

I was completely shocked by how well The Man in the Gray Flannel Suit has held up after so much time. I really did enjoy this film and implore any fan of cinema to check it out if they get the chance.

My Dinner with Andre